Macsome Spotify Downloader is capable of downloadind music or playlists from Spotify at up to 10x spped on your computer. It also offers you a speed settings from 1x to 10x.

However, spotify has changed it's attitude towards "high speed recording" in June, 2021.

The US copyright law describes clearly in chapter 10, section 1008:

So from copyright law point of view, there is nothing to worry about recording music.

However, when signing up to Spotify, you may have agreed to “terms of use”, including that you won’t record from it.

Recording is Visible While Using "High-Speed"

In general, it is indistinguishable for Spotify whether you are recording or not while listening to Spotify. So in general, recording is invisible to Spotify.

However, a few years ago, Spotify programmed a very interesting "high-speed" function that no other streaming service provides: Both the server and the PC software are able to work roughly 30 times as fast as in real time. Although this cannot be accessed directly in the official Spotify software itself, it can be used, for example with the help of system tools that "make time run faster "for Windows applications.

We integrated such a function into the Macsome software, allowing to speed up Spotify so that users can record much faster.

Spotify generally saves for every user on their servers permanently which pieces of music they have heard and when. So other than recording at normal speed, the use of this "high-speed function" is of course always directly visible to Spotify in this data: if e.g. a user has listened to music in half an hour with a playing time of 10 hours, he has obviously used "high speed". So far Spotify didn't seem to have much against it.

But apparently Spotify has recently changed its opinion on the subject:

Since June 2021 we have heard from several users of "High Speed" feature that Spotify has suspended accounts, with the reason "It has come to Spotify’s attention that your account has engaged in unauthorized use of the Spotify Service in violation of the Terms, including possibly engaging in unauthorized content downloads" This only happened to users who actually used "high-speed recording".

It is noteworthy that such suspensions are by no means "immediately" - it also happened to users who last used Macsome Spotify Downloader with high-speed months ago.

It has also happened to users of other tools from other manufacturers with similar functionality.

Spotify kindly offers "If you believe this was in error, and/or regain access to your account, please reach out to Customer Service and confirm you will not engage in unauthorized content downloads from our service going forward, and we will grant access back to your account again shortly" , which they actually do without any problems.

Based on this, we don't suggest users use the "high speed recording" function and explicitly warn against its use with Spotify.

Which Accounts are Suspended?

Spotify does not seem to suspend every high-speed user. Who they choose seems rather random. In any case, it also affects users who have not used high-speed recording for months. Therefore, it is unfortunately possible that, although you no longer use it from now on, you will still be affected in the future.

Therefore, we reiterated that we strictly recommend that you not use high-speed for Spotify recording in order not to risk your account being suspended. Please set 1x for the Conversion Speed. 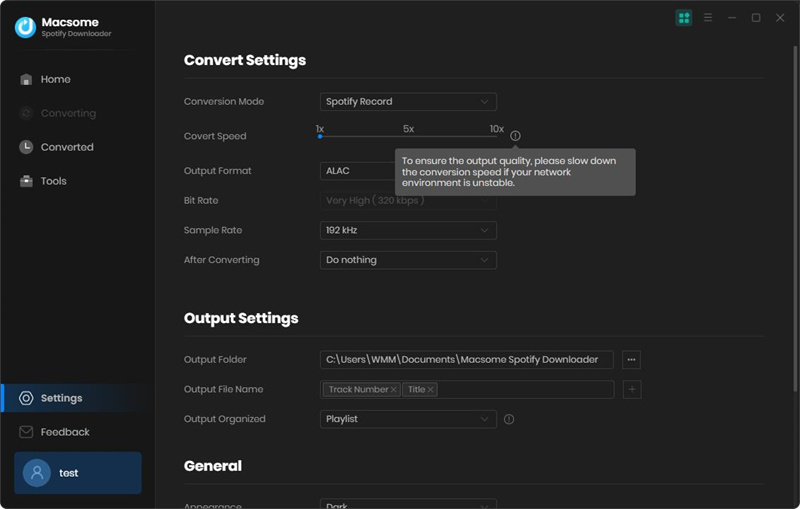